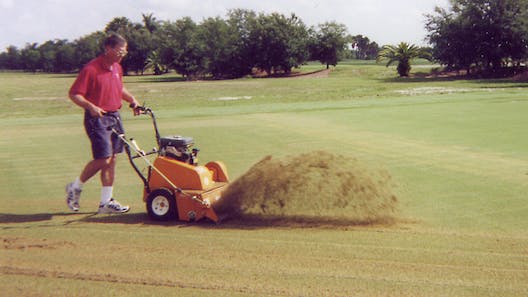 Verticutting IS vertical mowing and the objectives are:

To prune the grasses to improve tillering and stolon formation. This increases turf density and is very important for all fine competition turf such as bowling and golf greens. Not so critical for an ornamental lawn but loads of fun all the same!

Used regularly, every week to two weeks in good growing conditions from April to September will help maintain a firm low thatch surface right through the season. This will make for a faster playing surface and make scarifying in the autumn that much easier and cause far less damage. There are only a few suppliers of verticutting machinery with most being supplied as cassettes for professional scarifiers e.g. SISIS, or as cassettes for cylinder mowers e.g. Allett. The only stand alone domestic verticutter we know of is the Bosch AVR1100.

WARNING: This is perhaps the easiest way the ruin your lawn. Do NOT allow the blades to contact the soil. If your lawn is bumpy these will need to be resolved before verticutting.